When it comes to the types of fat we eat, it’s important to get it right. While there’s a lot of media attention on meat and animal proteins when it comes to human health and longevity, our appetite for oils and fats is growing significantly faster. 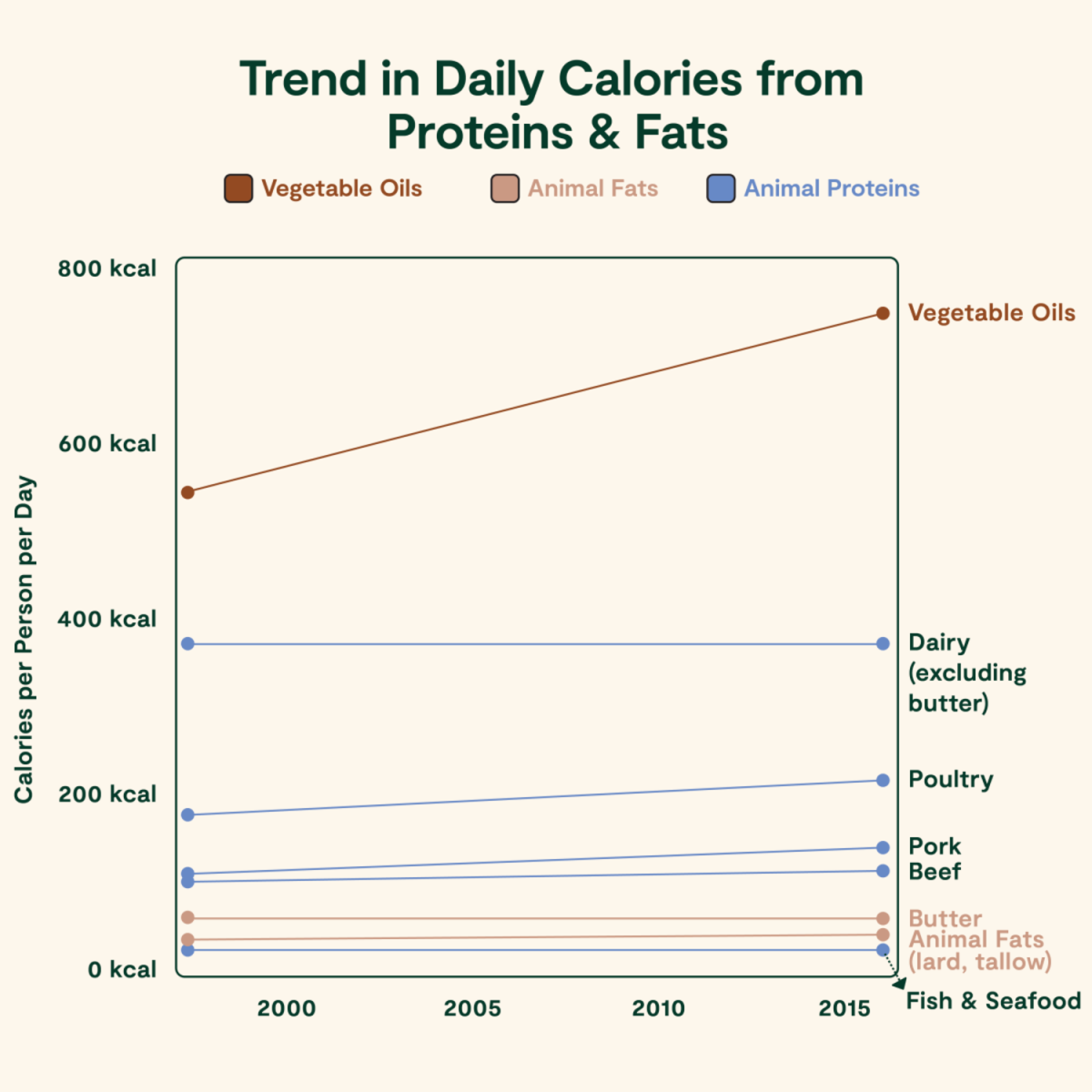 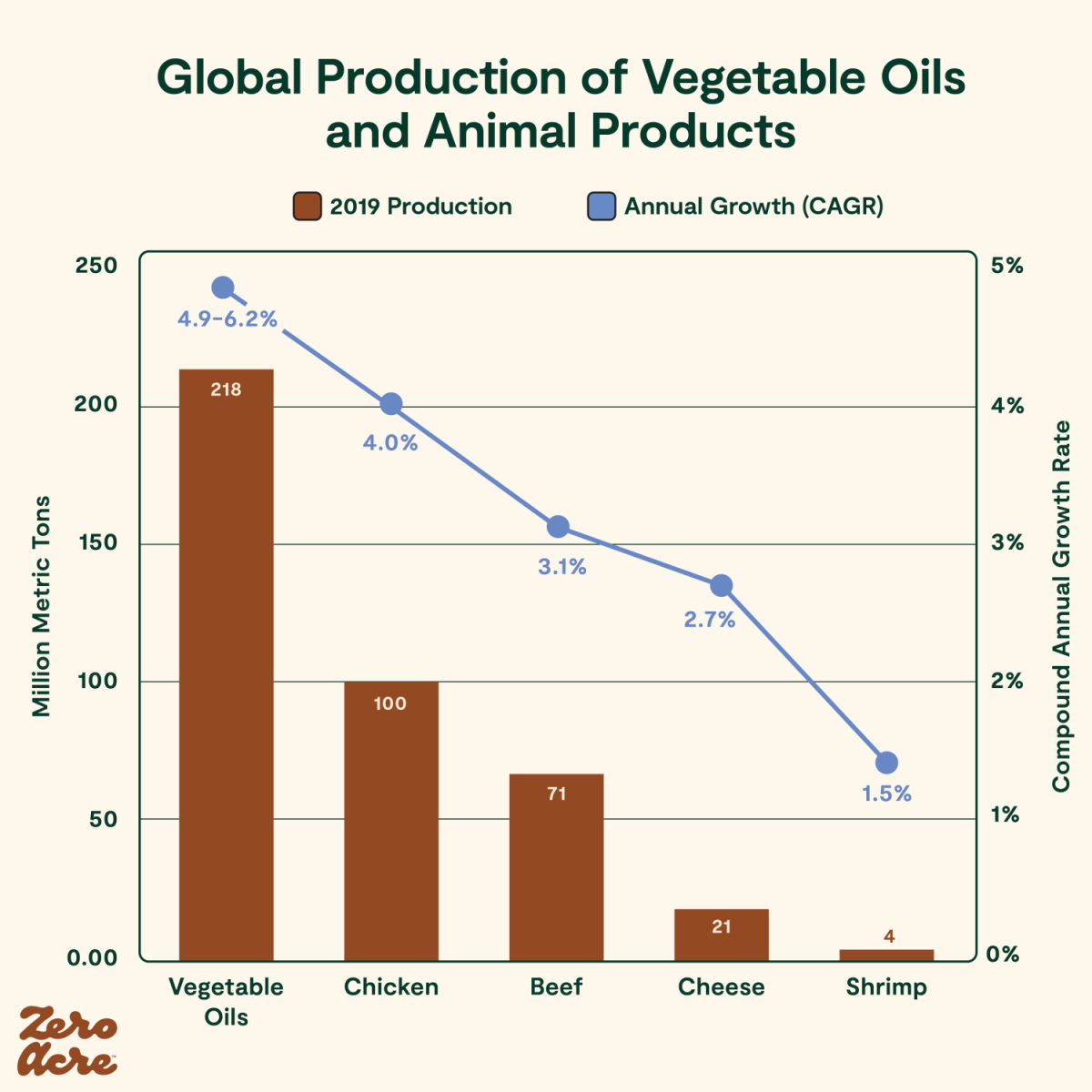 Increasing vegetable oil consumption is the result of a shift in cultural perspective during the 20th century. Fear of saturated fat and cholesterol made its way into the zeitgeist in the 1950s, and animal fats like butter and lard began to be replaced with vegetable oils — many of which were partially hydrogenated to create trans fats. We’ve been eating vegetable oils in larger and larger quantities ever since.

On the contrary, randomized controlled trials suggest that the increased consumption of vegetable oils, also known as seed oils, results in higher risk of death, more heart attacks, more cancer, and other negative health outcomes, such as unwanted weight gain and migraine headaches [*,*,*,*,*]. Seed oils’ negative impact on our health has been linked to their high content of a type of polyunsaturated omega-6 fat called linoleic acid.

In other words, high linoleic acid vegetable oils may be a major cause of increasing rates of chronic disease and poor health throughout the world.

Today, 6 in 10 American adults have a chronic illness such as heart disease or diabetes, and 4 in 10 have multiple chronic diseases, primarily caused by diet [*,*].

And the most significant change in our diets in the last hundred years has been a rise in linoleic acid consumption — from 1-3% throughout more than 99.9% of our evolution, to 8% or more of calories as linoleic acid in the U.S. today [*,*,*].

Eight percent of calories may seem benign, but most of the negative health outcomes that have been linked to increased linoleic acid consumption occur around 4-8% of calories.

Therefore, an important step in making a cooking oil that is more like medicine and less like poison, is to reduce the amount of linoleic acid to evolutionarily appropriate levels of 1-3% of calories.

The world was craving a cooking oil that was low in linoleic acid, high in healthy fats, could stand up to high-heat cooking, and didn’t destroy the environment.

Cultured Oil contains between 1.8-3% linoleic acid, depending on the batch. That’s up to 10 times less than olive oil, avocado oil, and canola oil, and 20-40 times less than soybean oil, sunflower oil, and grape seed oil. 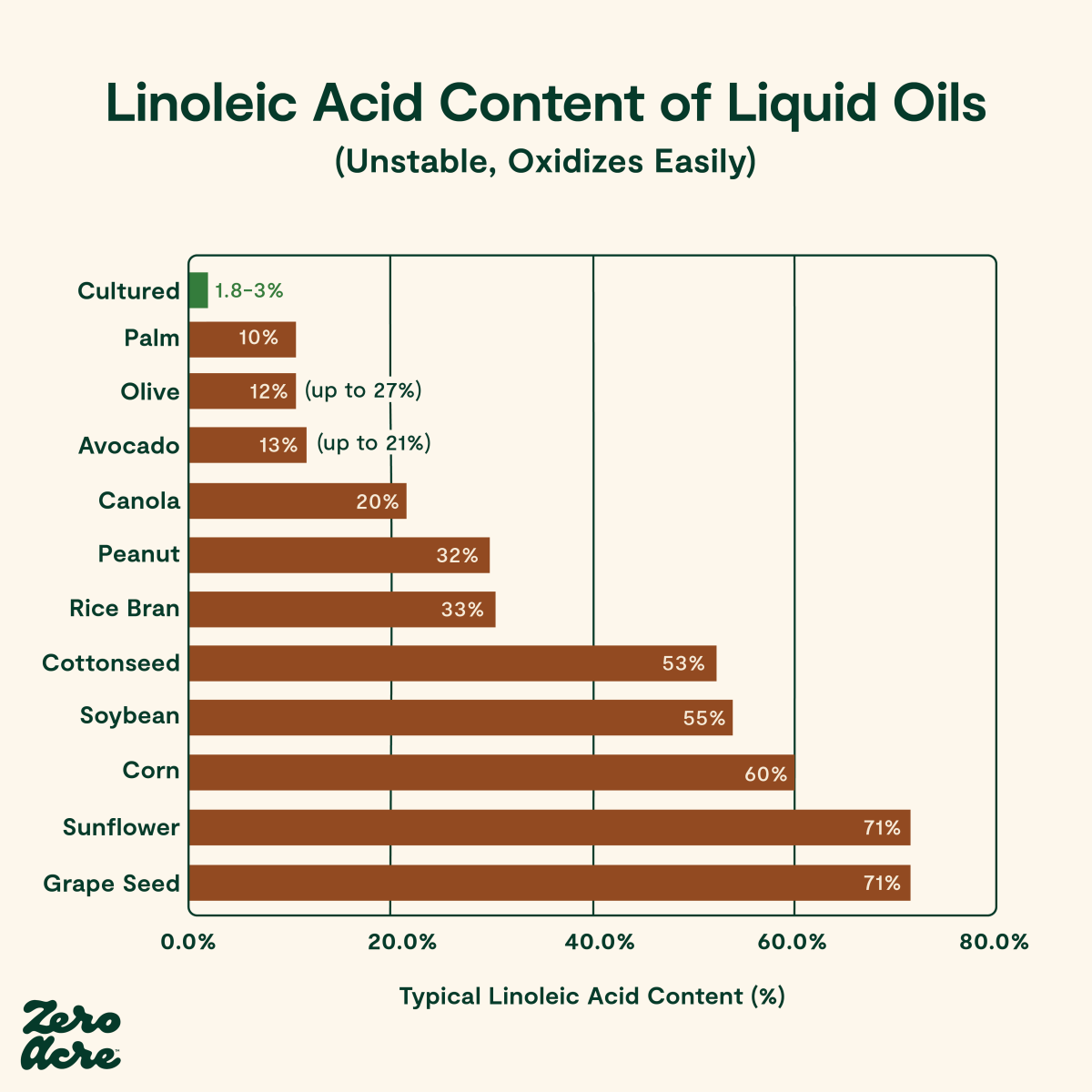 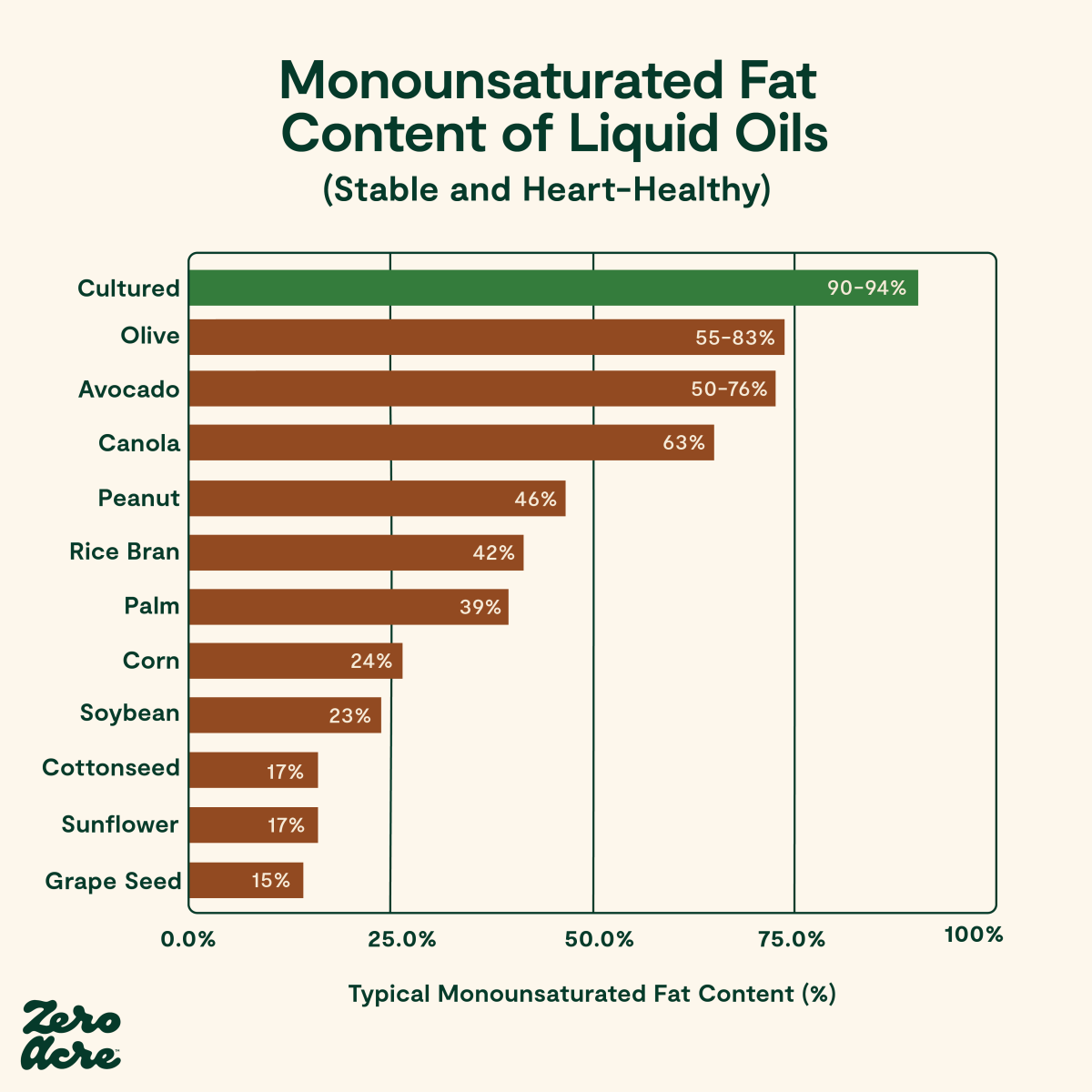 Cultured Oil is made using fermentation, not from pressing or chemically extracting oil from seeds and grains, but the fats it contains are nothing new.

Cultured Oil is made up of the same healthy fats found in many other foods, and the only thing “new” about it is a higher amount of good fats like monounsaturated fat and a lower amount of inflammatory fats like omega-6 linoleic acid.

In addition to a whole lot of heart-healthy and heat-stable monounsaturated fat, and a tiny amount of linoleic acid, Cultured Oil also contains a number of other fatty acids. Every batch of Cultured Oil is slightly different, but here’s a snapshot of the detailed fatty acid profile of a recent batch: 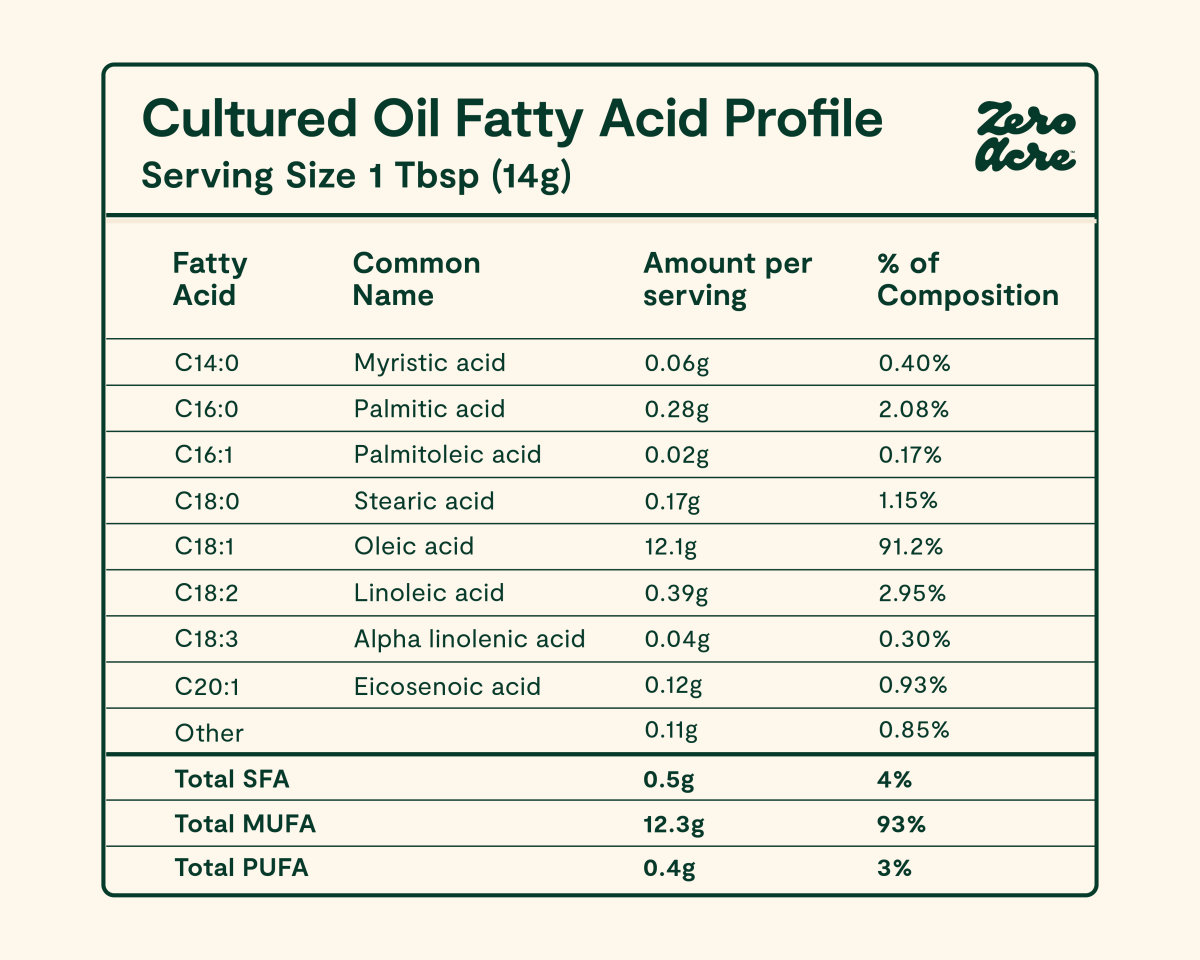 The high content of polyunsaturated fats (PUFAs) like linoleic acid in vegetable oils may be a problem for our health, in large part, because of how susceptible they are to oxidation when exposed to heat, which results in the formation of highly reactive and physiologically toxic unsaturated aldehydes, including 2,4-alkadienals, 4,5-epoxy-2-alkenals, 4-peroxy-2-alkenals, and 4-hydroxy-alkenals, such as 4-hydroxynonenal (4-HNE).

Oil oxidation and aldehyde generation are a big problem when it comes to cooking oils. As a result of using unstable vegetable oils for frying, the toxic aldehyde concentration of most fried food is 100-200x higher than the safe daily limit set by the World Health Organization [*].

One of the most profound effects of Cultured Oil’s healthy fat profile is its resistance to oxidation. To determine the safety and stability of Cultured Oil for cooking, we had it put to the test. In a third-party analysis of Cultured Oil versus other cooking oils, the production of aldehydes was followed over time during a pan frying experiment in which different liquid cooking oils were exposed to 356ºF.

After 90 minutes of heating, Cultured Oil produced 6-11 times fewer PUFA-derived aldehydes than moderate-linoleic oils like avocado and olive oil, and about 20 times fewer than high-linoleic oils such as sunflower oil and soybean oil: 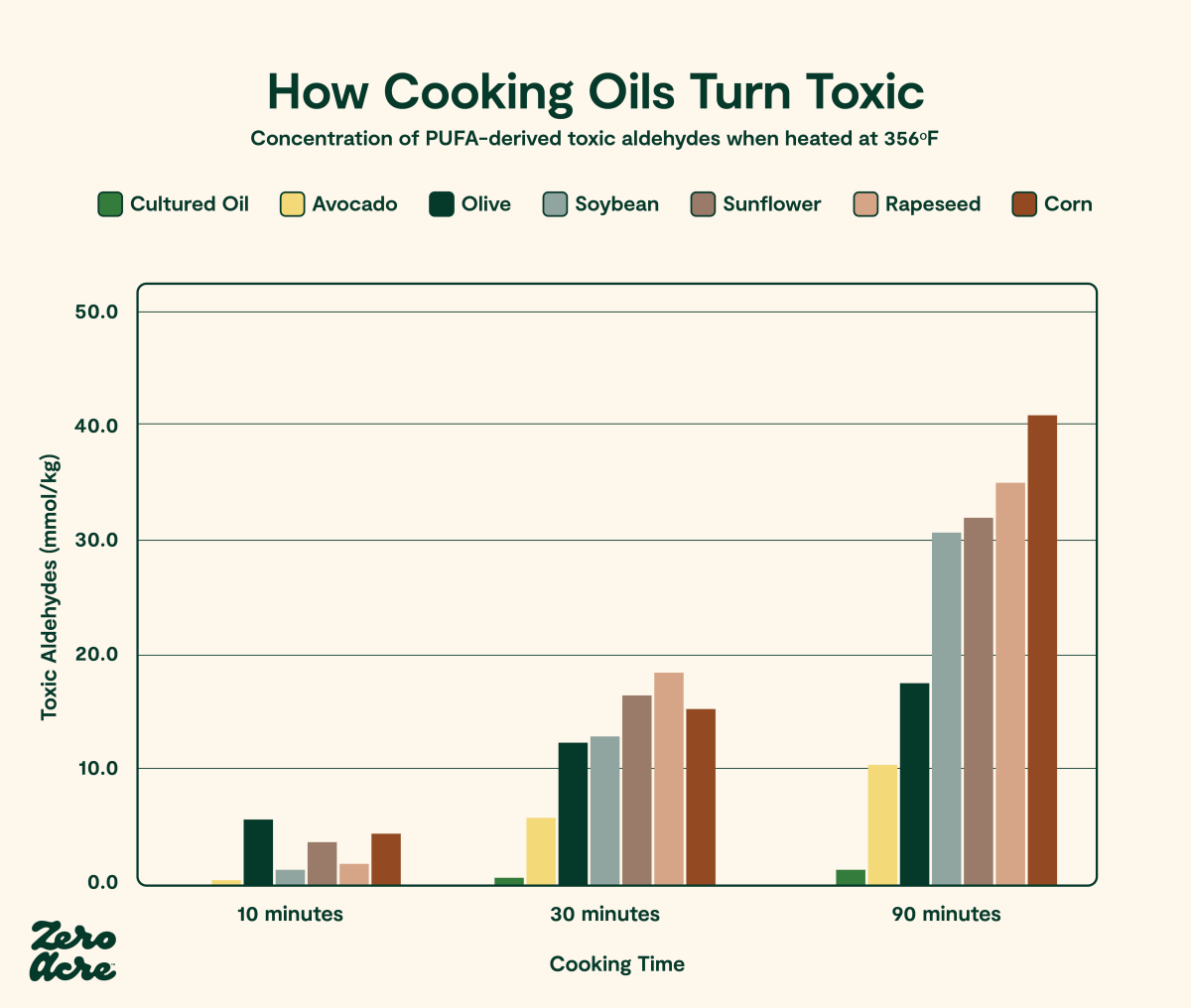 Cultured Oil was the only cooking oil studied to show no measurable PUFA-derived toxic aldehyde generation after 10 minutes of cooking, a typical amount of time for pan-frying and stir-frying.

Because Cultured Oil has over 90% monounsaturated fat and less than 4% polyunsaturated fat, Cultured Oil is on par with solid fats and animal fats when it comes to inherent oxidative stability, while remaining liquid at room temperature and in the refrigerator: 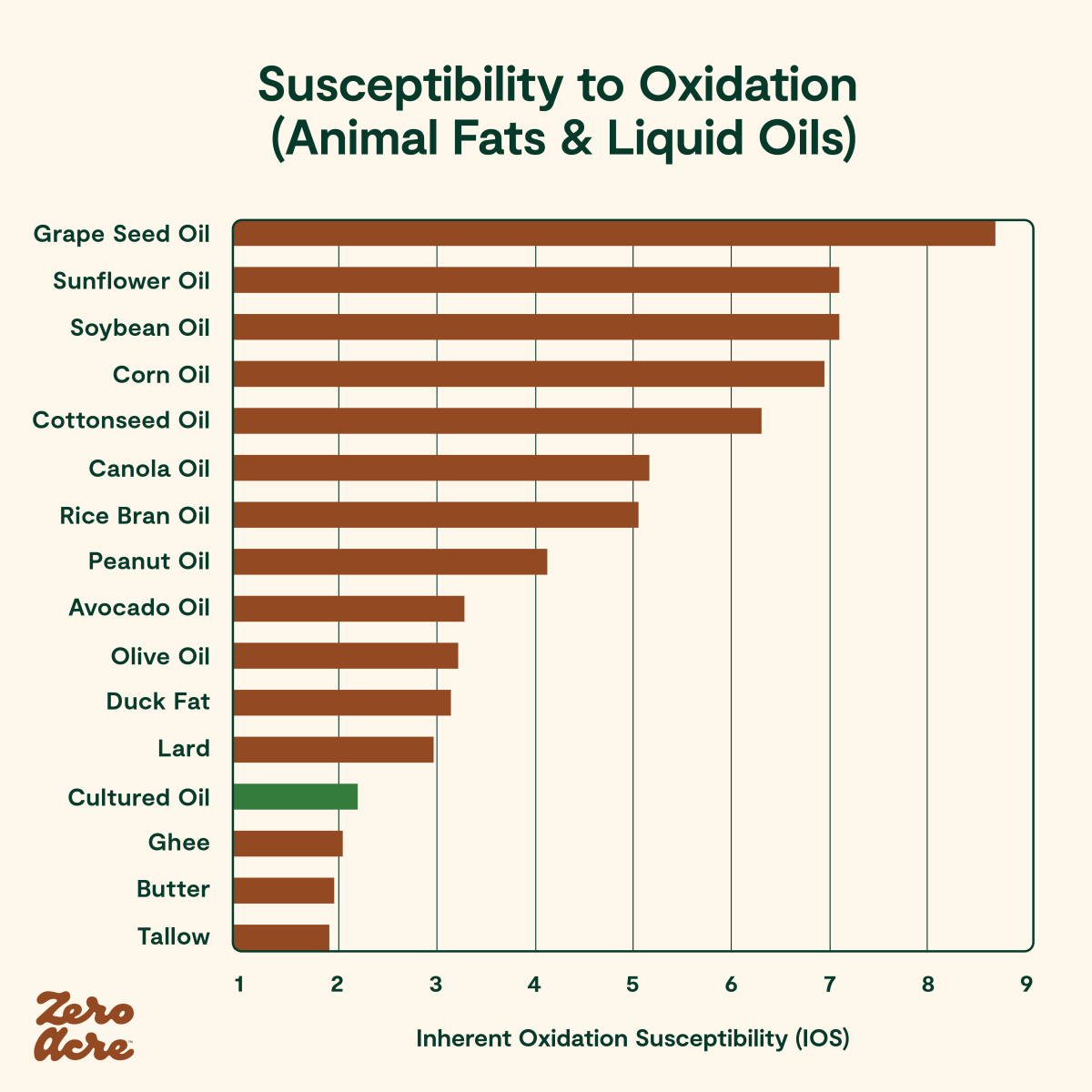 While high heat has the largest effect on oil oxidation, oil also begins to oxidize and turn rancid when it is exposed to light. For that reason, Cultured Oil comes in BPA-free aluminum bottles, which do not let in light. Even dark green tinted glass lets in light, especially while sitting on supermarket or warehouse shelves under fluorescent lights [*]. Recent studies have even suggested that fluorescent lights are more damaging to oil than UV light [*].

While oxidative stability is more reflective of the health impact of cooking an oil at high heat, smoke point also matters when it comes to cooking foods at high temperatures. Smoke point refers to the temperature at which an oil starts smoking as a result of impurities (other compounds and materials in the oil) burning, which can result in undesirable flavors, acrolein, and a smoky kitchen.

To choose the healthiest cooking oil, both smoke point and oxidative stability should be considered. Cultured Oil has one of the highest recorded smoke points, while also resisting oxidation similar to solid fats such as coconut oil: 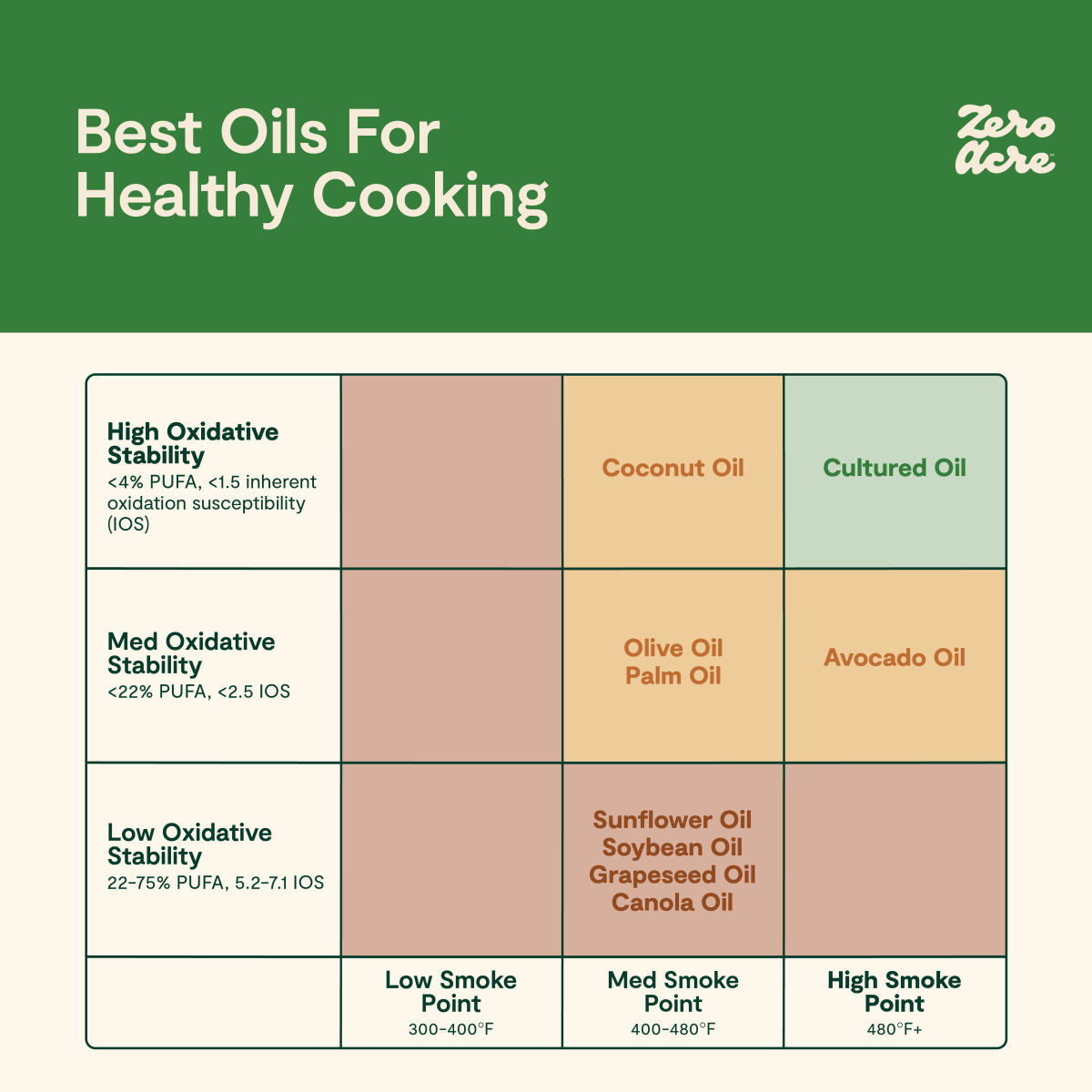 You may think you have quality olive and avocado oils in your pantry, but unfortunately that may not be true. Previous reports have found that about 80% of extra virgin olive oils and avocado oils sold in the U.S. are fraudulent, rancid, or mixed with other oils [*,*].

Each bottle of Cultured Oil, on the other hand, is linked to a single origin of production and customers can scan a QR code on the back of their bottle to look up its unique composition, guaranteeing its authenticity. Beyond authenticity, we test each batch of Cultured Oil multiple times for quality and purity, across a number of different measures, including:

We record this information for each batch and make it available for every unique bottle of Cultured Oil. That’s a level of transparency that doesn’t exist with any other oil.

Every bottle of Cultured Oil is low in linoleic acid and free of GMOs, pesticides or herbicides, solvents like hexane, and major food allergens like gluten, soy, corn, and peanuts.

Cultured Oil is glyphosate residue-free certified, Whole30 Approved, vegan, kosher, keto, and gluten-free. The one thing it is not is low fat.

Our hunter-gatherer ancestors did not use cooking oil.

They hunted wooly mammoths, caught fish, dug up root vegetables, and picked fruit. Vegetable oils do not offer us any key nutrients that we need to survive as a species.

One solution to the problem of vegetable oils would be for everyone across the globe to simply consume less and stop eating vegetable oils altogether, and not replace them with anything. If it were realistic, it would be an effective solution. However, it’s not realistic, nor something we could expect to happen any time soon.

Instead of forcing people to stop eating their favorite foods, we can simply make those foods less harmful, and we have the opportunity to do just that with Cultured Oil.

Cooking oil has become a centerpiece of modern diets; it makes our food delicious and makes cooking easier. But we should be careful about the cooking oils we use today. The safest oil is one that is made of the same fats that humans have been eating for hundreds of thousands of years (like monounsaturated fats), low in the fats that humans have never eaten much of (like omega-6 linoleic acid), and is tested regularly for quality and purity.

If our hunter-gatherer ancestors were to use a cooking oil, we think they’d go Cultured.

SIMILAR ARTICLES
VIEW ALL POSTS
Stay up to date on new articles and recipes.
Sign up for our newsletter to get the latest on how to #EatBetterFat.