Vegetable Oil Substitutes: Here’s What You Can Use Instead

Vegetable oils are incredibly common in most recipes today. You can find vegetable oils like soy oil, sunflower oil, and canola oil in everything from salad dressings to baked goods, but there’s a catch — they’re terrible for your health and the environment.

Luckily, replacing vegetable oils with healthier alternatives is easy. Whether you want a vegetable oil substitute that’s better for your health, or you’re in a pinch and need a convenient ingredient swap for a recipe you’re planning to cook, we’ve got you covered.

The Problems with Vegetable Oils

While “vegetable oils” might sound like wholesome, healthy ingredients, most of them are actually made from seed crops and refined through complicated industrial processes involving high pressure, heat, and solvent chemicals:

You might be surprised to learn that these common, highly refined fats don’t have a long track record of usage. Most of the oils listed above were only introduced in their current, refined form within the last century.

And with these new, inexpensive, and widely available ingredients, global production of vegetable oils has skyrocketed, increasing over 1600% in the past hundred years [*,*]. In the United States, the consumption of soybean oil alone has grown 1,000-fold since 1909 [*]. 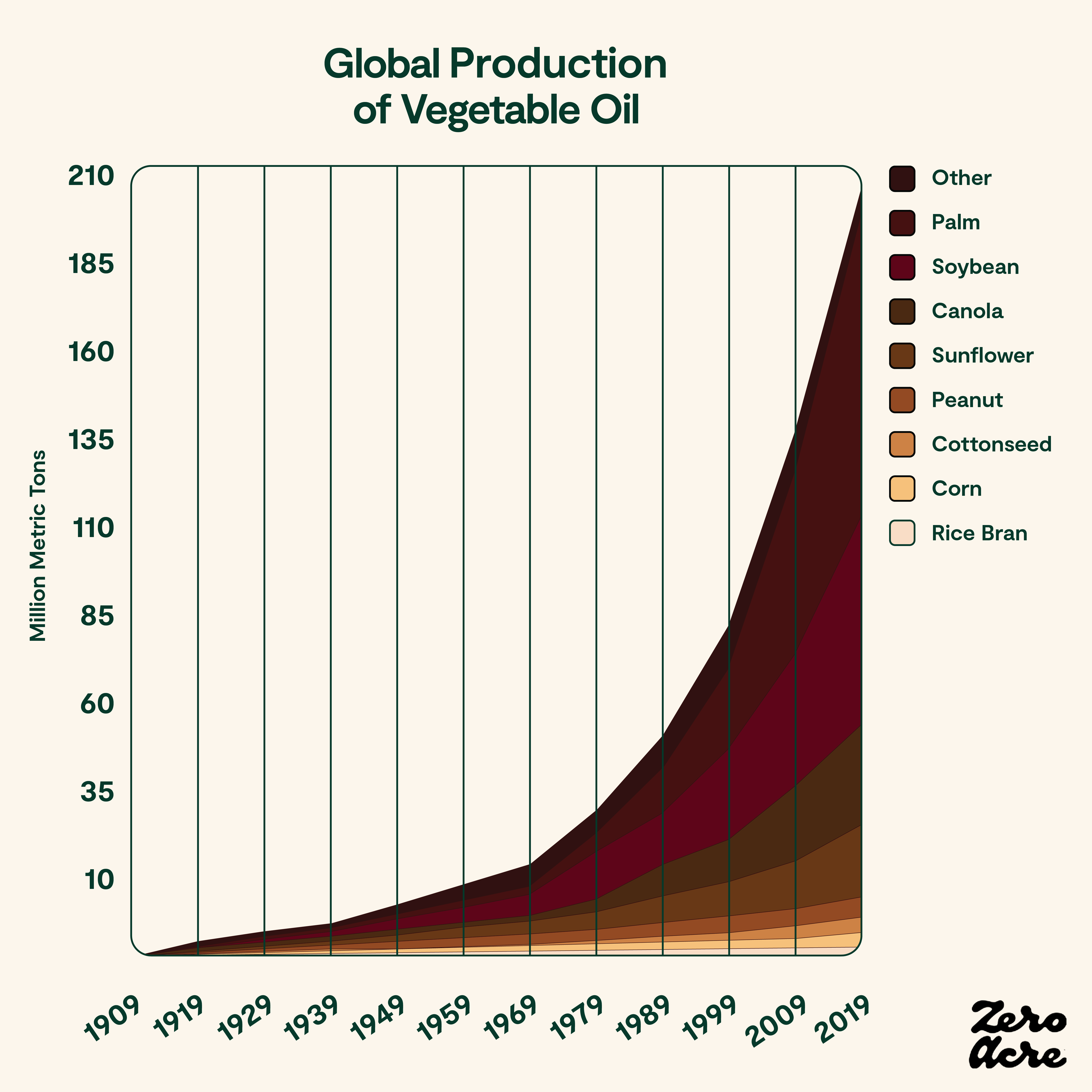 Some early, flawed 20th-century studies suggested that vegetable oils were “heart-healthy,” but experimental and clinical evidence shows they’re unsafe and even meet the scientific definition of toxicity.

Compared to most dietary fats and cooking oils, vegetable oils are very high in linoleic acid, an omega-6 fat shown to increase inflammation [*].

The other problem with vegetable oils is that they’re very unstable and oxidize — or break down easily — during manufacturing, transport, storage, cooking, and even in your body after you consume them [*,*,*,*,*].

And evidence suggests the byproducts of oxidized omega-6 fats are even more inflammatory and harmful than the fats themselves [*].

The low production cost of vegetable oils makes them appear economical, but they’re actually one of the most inefficient crops when it comes to land use. 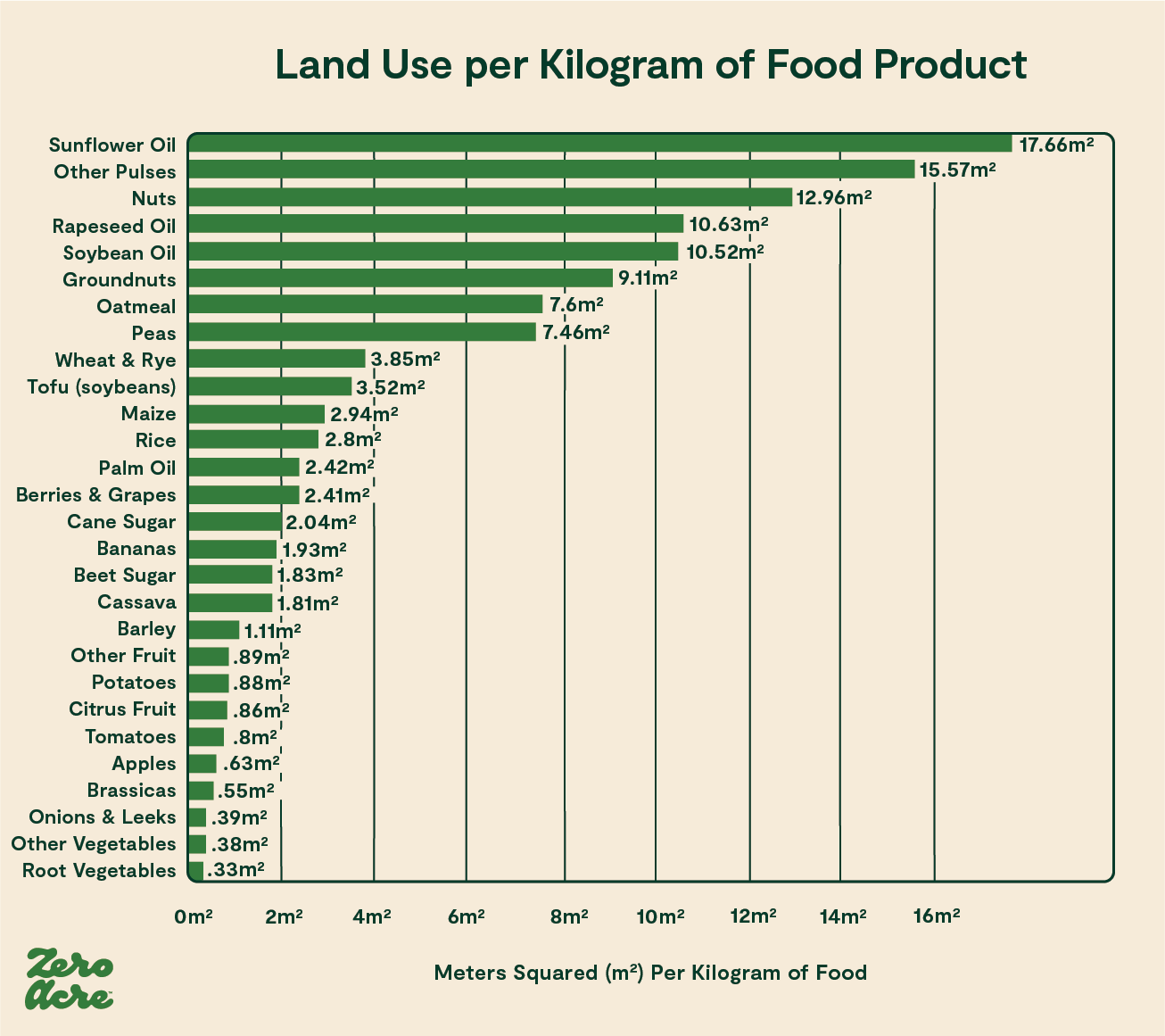 In other words, the amount of land used to produce a kilogram of vegetable oil from soybeans, rapeseeds, or sunflowers could instead produce 30 to 50 times more real vegetables by weight, such as spinach, sweet potatoes, or carrots — which have far more nutritional value [*].

As a result, vegetable oil crops are some of the biggest crop drivers of deforestation and greenhouse gas emissions today [*,*,*].

Vegetable oils also have their share of disadvantages from a culinary perspective.

Omega-6 oils are inherently unstable and oxidize easily. When stored or used for cooking, even below the “smoke point,” they break down into other compounds that are unhealthy [*]. The instability and oxidation of vegetable oils can also give them a rancid or bland taste.

You might not notice it if you’re eating processed pre-packaged foods, but if you’re cooking a tasty recipe at home, there’s a good chance you’ll find that food cooked with vegetable oils has an underlying stale flavor, whereas healthier vegetable oil substitutes can impart a fresher taste. 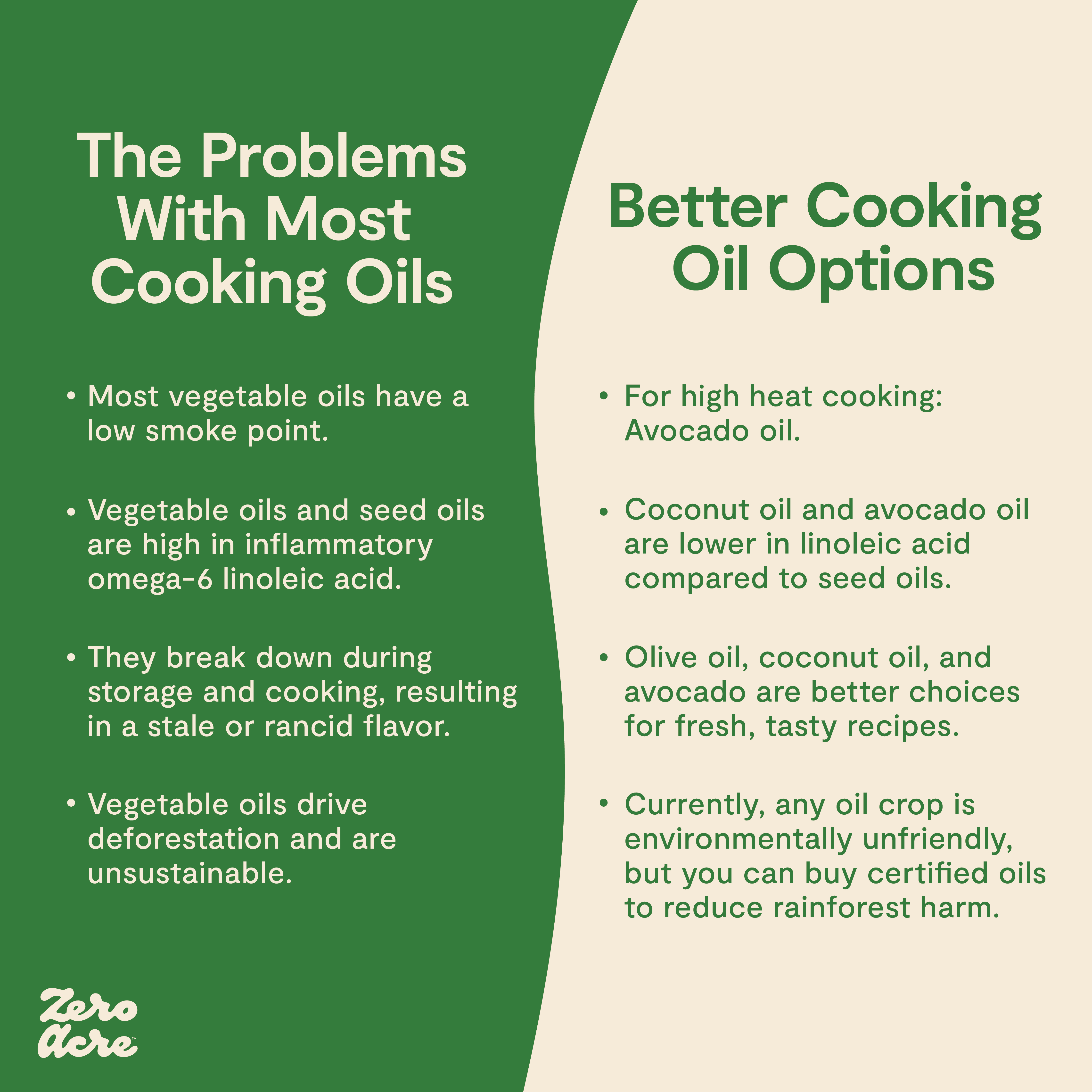 What Are the Uses of Vegetable Oil in Food and Cooking?

Vegetable oil usually refers to “all-purpose” cooking oils derived from crops that can be used for sauteing, frying, baking, and braising. They’re also used in dressings, sauces, marinades, and other oil-based mixtures.

Finally, vegetable oils also serve as an inexpensive source of calories in processed foods and some recipes. 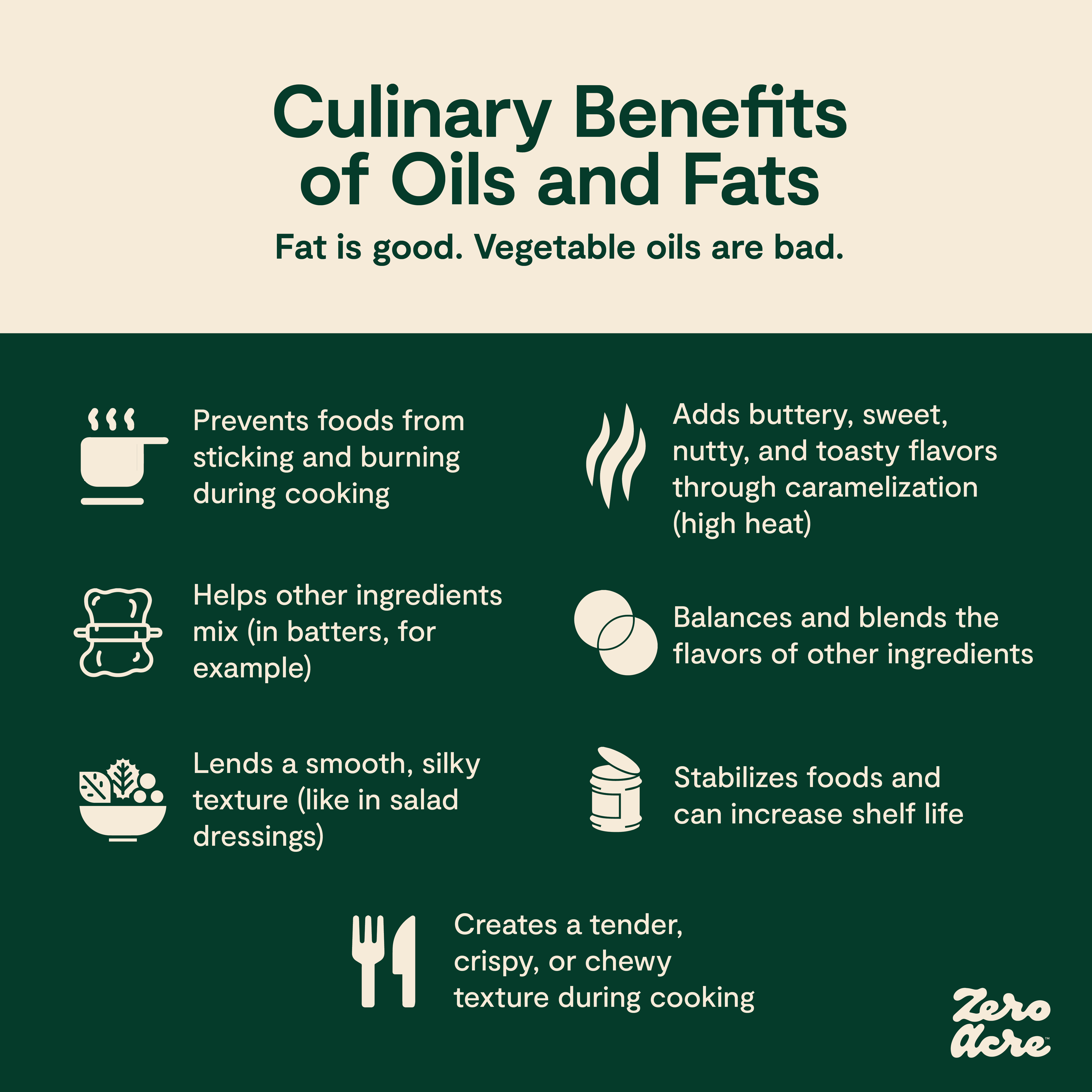 How to Choose the Best Vegetable Oil Substitute

Substituting other ingredients in place of vegetable oils in your recipes isn’t difficult at all.

If you’re replacing them to make your meals healthier and tastier, you’ll want to make sure your alternative ingredients:

And in the practical sense of recipes turning out correctly, you need to choose a vegetable oil substitute that’s appropriate for that recipe.

In other words, applesauce or Greek yogurt can be great substitutes to help add texture and moisture, but they’re not going to work as an oil replacement in a salad dressing.

In some recipes, like salad dressings, marinades, and sauces, you need a certain amount of oil to help the other ingredients mix and provide a smooth texture. Those recipes just won’t turn out as well with a non-oil substitute.

Cultured Oil is a neutral-tasting cooking oil that's high in heart-healthy and heat-stable monounsaturated fat. It has a sky-high smoke point of 485°F and also has one of the lowest linoleic acid levels on the market — less than 3%.

Unlike other cooking oils, you can use it for everything from salad dressings (that won't clump in the fridge) to sauteing and deep frying (because of its high smoke point and oxidative stability).

Made by fermentation, Cultured Oil uses 85% less land than canola oil, emits 86% less CO2 than soybean oil, and requires 99% less water than olive oil, making it the natural choice when it comes to sustainability.

Avocado oil isn’t completely neutral-tasting, but it’s less bold than olive oil. It tastes something like a mild avocado, with grassy and nutty notes that don’t stand out as much when blended with other ingredients.

Like olive oil, avocado oil is high in monounsaturated fat and contains moderate amounts of linoleic acid, making it a better option than high-linoleic vegetable oil [*]. It’s also liquid at room temperature, but is likely to clump in the fridge.

It’s got a high smoke point of 428-482°F or more, which means you can use it for nearly any application, even high heat cooking [*].

Every day, about 9.5 billion liters (roughly 3,800 Olympic pools) of water are used in avocado production, most of which is extracted from aquifers [*]. Additionally, avocado production has caused biodiversity loss, soil degradation, and even extreme weather conditions [*].

Coconut oil is solid at room temperature but liquefies around 78°F. Because of the fatty acid composition of coconut oil, it can add a crisp texture and rich mouthfeel to recipes.

The high melting point of coconut oil is attributable to its high saturated fat content, which also makes it lower in harmful linoleic acid.

Unfortunately, coconut oil grows in the same regions as palm oil (palm oil production being a major cause of deforestation) and there’s currently a debate over whether or not coconut oil is environmentally friendly or, like palm oil, drives excessive deforestation [*].

Evidence also suggests that coconut oil production threatens more species per kilogram of oil produced than any other oil crop [*].

Olive oil has a smooth texture and provides a peppery, astringent, “green,” and sometimes nutty flavor to recipes.

It’s high in monounsaturated fat and contains moderate amounts of linoleic acid, but still remains liquid at room temperature, making it a suitable vegetable oil replacement for dressings and sauces if you enjoy the taste [*].

The smoke point of olive oil is around 375°F, so it’s not suitable for high temperature applications like searing or sautéing [*]. While olive oil has a lower smoke point and is still prone to oxidation during cooking, it is less susceptible to oxidation than most other vegetable oils [*].

Olive oil does tend to solidify under refrigeration, so you might need to bring your salad dressings up to room temperature before your next meal.

And, unfortunately, olive oil is one of the greediest oil crops in terms of its land use, requiring more land per kilogram than other common oil crops [*,*]. Olive oil also requires more water than any other oil [*]. Lastly, The New York Times reports that up to 69% of imported extra-virgin oil is diluted with other oils or doesn’t meet the taste and quality standards suggested by the label [*].

Other Substitutes For Vegetable Oil

If you’re experimenting with new recipes from scratch, looking for non-oil substitutes for vegetable oil, or simply don’t have other substitutes on hand, here are additional options that can work:

With high-moisture ingredients like applesauce, buttermilk, and fruit purees, try starting with a 75% substitution instead of one-to-one. In other words, if your recipe calls for one cup of vegetable oil, try three-quarters of a cup of one of these replacements, then adjust as needed based on your results.

Every recipe is different, so it’s best to approach these substitutes (especially the non-oil options) with an experimental mindset. You may also find that mixing several different substitutes together works best for some recipes.

There’s some truth to the saying that “cooking is an art, but baking is a science.” In other words, while you can substitute ingredients during baking, doing so may change the entire recipe — for better or for worse.

Cultured Oil is a one-to-one substitute for seed oils in baking and is neutral-tasting and low in inflammatory linoleic acid.

Olive oil, avocado oil, coconut oil, and butter tend to be lower in linoleic acid and are considered reliable substitutes for other seed oils. However, they all tend to have strong flavors that can outshine the ingredients in your baked goods.

Also, keep in mind that liquid fats tend to provide a chewy or soft mouthfeel, while solid fats like coconut oil will contribute a crumbly, flaky texture instead.

You can also use the non-oil substitutes applesauce, buttermilk, cornstarch solution, fruit purees, or Greek yogurt in baking.

Here’s what to keep in mind if you try a non-oil substitute:

And remember that you only get one chance per baked item, so consider making a smaller test batch before you go big with your modified recipe.

With dressings, vinaigrettes, sauces, marinades, and other concoctions, the main purposes of vegetable oil are to provide texture and to help unify the flavors of the other ingredients.

Unlike baking, it’s easy to perform a lot of low-stakes experimenting to figure out what works, and there are really no rules or guidelines. You can easily make several very small batches and modify until you find something you like.

The simplest direct replacements for vegetable oil are other oils, specifically Cultured Oil, which has a neutral flavor and won't clump or solidify in the fridge. Olive oil and avocado oil are also good options but have a grassy or "green" flavor and will solidify when cooled.

These ingredients contain less or no fat but have interesting textures or other properties (such as being acidic, savory, salty, or sweet):

If you want to recreate a recipe as faithfully as possible, use one-to-one replacements (a tablespoon of your substitute in place of a tablespoon of vegetable oil, for example). That way, you’ll preserve the ratios of other ingredients.

But if you’re inventing your own recipe from scratch, you can try any substitution ratio you like.

They also create delightful textures and flavors by contributing to caramelization and melding fat-soluble compounds.

For this application, you really need a cooking oil that has a high smoke point:

For comparison, most vegetable oils and vegetable oil blends have a smoke point around 400-430°F. They’re an extremely poor high-heat choice for both culinary and health reasons. 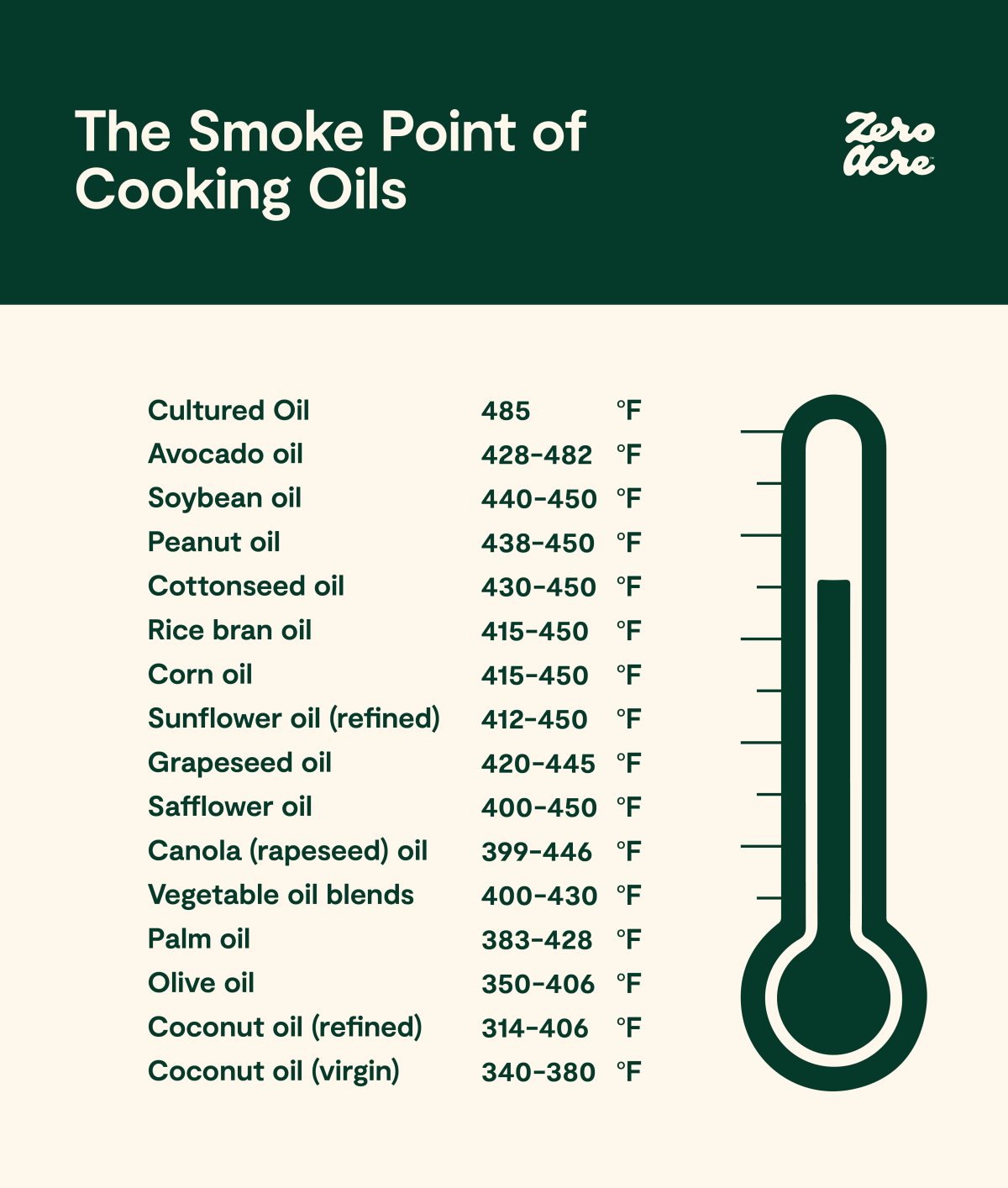 There can be no doubt that replacing vegetable oil with alternative options can improve the quality of your recipes and give you a health boost, but they’re not without their downsides. Here are the biggest tradeoffs to keep in mind.

Every cooking oil has its pros and cons, but there are plenty of options that are much healthier and more sustainable than vegetable oils. Cultured Oil offers an array of culinary and health benefits, including a clean, neutral taste, a high smoke point, and high oxidative stability.

Whether you’re baking, making a dressing or sauce, or cooking with low or high heat, the most important thing you can do for your health is to avoid oils and fats that are high in inflammatory omega-6 linoleic acid.

So, if you’re looking for a vegetable oil substitute, it’s important to take into account the omega-6 linoleic acid content, stability, smoke point, flavor, texture, and other properties (such as how it works for baking) for the best (and healthiest) results.

SIMILAR ARTICLES
VIEW ALL POSTS
Stay up to date on new articles and recipes.
Sign up for our newsletter to get the latest on how to #EatBetterFat.