Why are Fried Foods Bad for You? (The Real Reason)

Fried food has been a culinary staple for hundreds, if not thousands of years, with some evidence of pan frying reaching as far back as ancient Egypt.

Until the 20th century, most people cooked fried foods in lard or other animal fats, but all of that ended when inexpensive, mass-produced industrial seed oils gained popularity in the last hundred years or so. Today, almost all fried food is made with seed oils like soybean, sunflower, corn, or peanut oil.

In this article, you'll learn why common fried foods are harmful, the increased risks of health problems associated with consuming them, and what you can do instead to make frying healthier.

Why Are Fried Foods Bad For You?

Fried foods pack a one-two punch: they're made using unhealthy, inflammatory seed oils, and they're cooked at high temperatures that damage those oils and cause additional problems. We'll start by unpacking the oils that are most commonly used in fried foods and the issues they cause.

Seed oils, often called industrial seed oils, are a subset of vegetable oils derived from seeds. These oils are high in omega-6 linoleic acid, which is associated with health problems, including inflammation, obesity, and cardiovascular disease [*,*].

These oils are almost always derived from the seeds of crops and include:

Because of their high linoleic acid content, these oils aren’t great for your health, even when consumed unheated or lightly heated. However, frying with these oils appears to increase the risk of health problems even further compared to consuming them at room temperature or lightly heated.

The reason is that seed oils high in linoleic acid are unstable, which means they break down into harmful byproducts during manufacturing, storage, transportation, and especially during high-heat frying [*].

And it's the creation of these compounds that is responsible for the increased harm associated with fried food consumption. 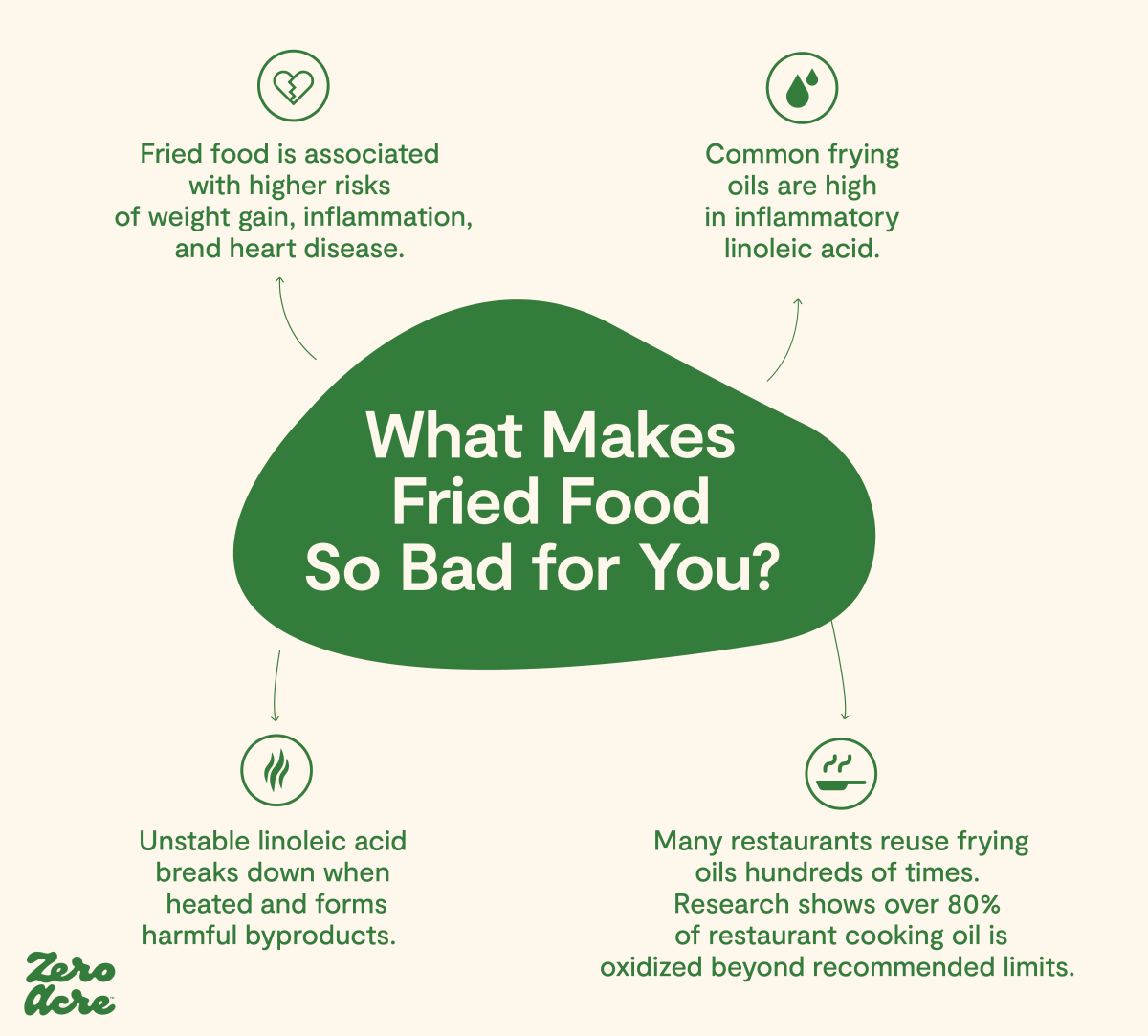 The Problems With Heating and Reheating Vegetable Oils

Unlike home cooking, many restaurants reuse frying oil hundreds of times for convenience and cost savings. This practice isn't condoned, but it's also not illegal.

A 2018 study on restaurant oil quality found that over 80% of randomly selected restaurant frying oil was oxidized beyond the recommended limit [*]. Oxidation is a chemical reaction that involves the loss of an electron and creates harmful, toxic compounds in fried foods [*].

Seed-derived "vegetable oils" high in omega-6 linoleic acid, which are the most common frying oils, begin to break down rapidly from the first time they’re heated and get worse with additional reheating [*]. For example, research shows that after only 30 minutes of heating, levels of toxic, carcinogenic aldehydes in corn oil and sunflower oil increase by 1,000% [*].

Research also shows that as much as 15% of the fatty acid content of restaurant-prepared french fries is oxidized [*]. And oxidized omega-6 fatty acid byproducts like hydroxylinoleate (HODE) and 4-hydroxynonenal (4HNE) are closely linked with obesity, inflammation, and cardiovascular disease [*,*,*,*,*,*].

Finally, frying and reheating vegetable oils can raise levels of harmful trans fats by 1,000-2,000% or more, increasing trans fats to 5% of the total fatty acid content in frying oils [*,*]. While artificial trans fats are now banned as food ingredients in many regions, these rules don’t apply to fried foods because the trans fats are formed during the cooking process.

It’s no secret that fried foods aren’t exactly healthy, but to what extent are they harmful? 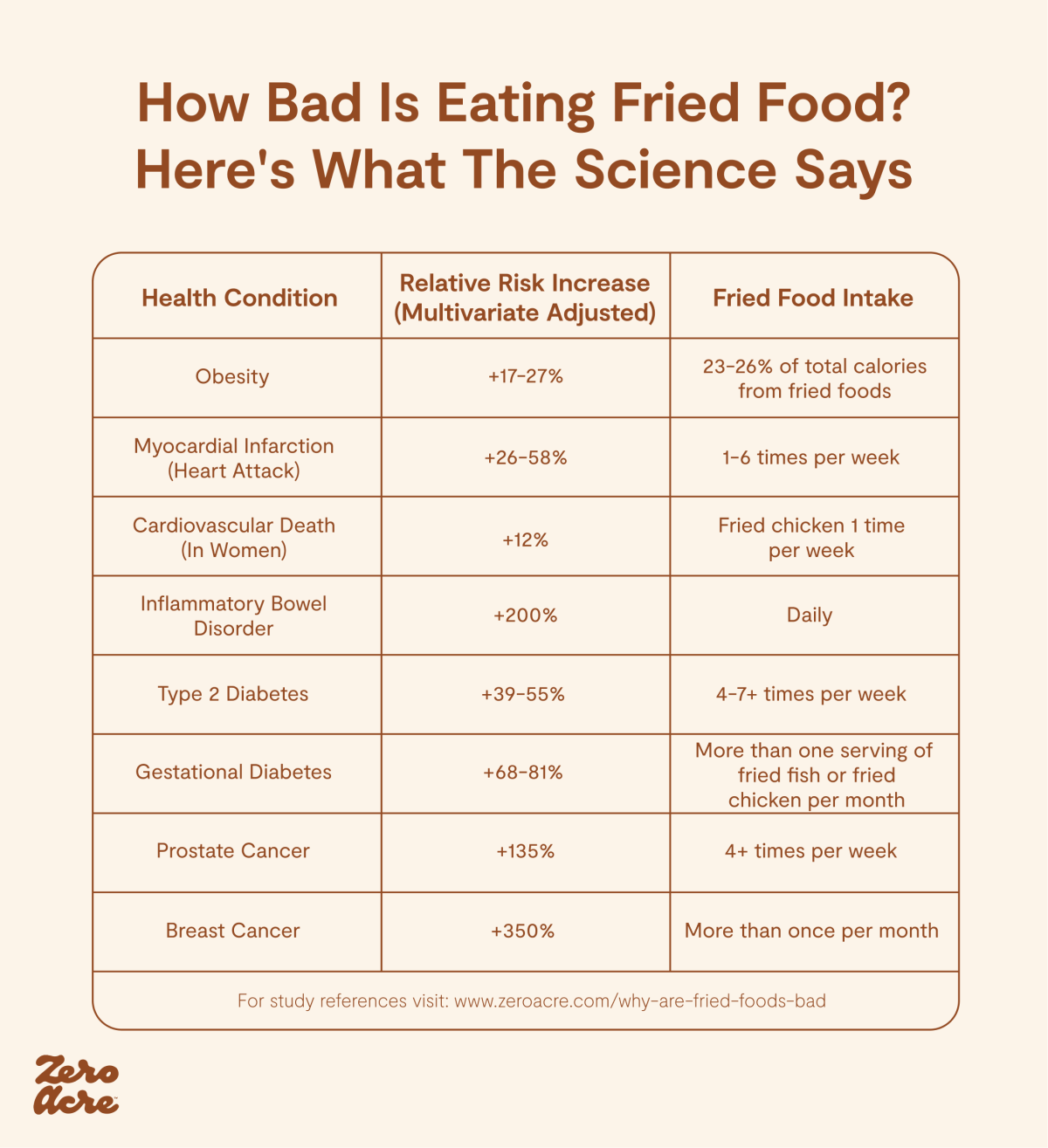 Fried food consumption is associated with higher obesity rates, even when adjusting for other factors like caloric intake. In other words, "caloric density" (the higher calorie content of fried foods) isn't the only factor behind weight gain when it comes to fried foods.

Studies suggest that potato chips and french fries result in 3 to 6 times more weight gain than boiled, baked, or mashed potatoes despite having the same caloric content [*]. The primary difference is that chips and fries are generally fried in seed oils high in omega-6 linoleic acid, while boiled, baked, and mashed potatoes typically contain other fats that are low in linoleic acid (such as butter or cream).

A large 2021 meta-analysis (study of available studies) in BMJ Heart found that a high intake of fried foods increases the risk of major cardiovascular events by 28%, coronary heart disease by 22%, stroke by 37%, and heart failure by 37% [*].

And in a five-year study of over 100,000 women aged 50-79, consuming fried foods once or more per week was associated with a 13% higher risk of all-cause mortality (death) and a 12% increased risk of cardiovascular mortality occurring at any time during the study [*].

In a 2018 study of people who had survived a myocardial infarction (heart attack), compared to control participants who hadn't had a heart attack, frequently consuming fried foods from restaurants was associated with a 26-58% higher risk of heart attacks [*]. The study, which had over 4,300 participants, also adjusted for other factors that influence heart health, including hypertension, smoking, obesity, fiber intake, and alcohol use.

Interestingly, the same trend didn't exist for home-cooked fried foods [*]. Unlike restaurant-fried foods, frying foods at home wasn't associated with any increased risk of myocardial infarction, even with frequent consumption.

The researchers found that people used the same types of oil at home as were used in restaurants — soybean, sunflower, and palm oil. Therefore, the main difference that might explain the disparity in effects was the higher frying temperatures and reuse of cooking oil that occurs in restaurants, resulting in the formation of harmful heat-generated compounds [*].

The changes that occur during frying, including oxidation, polymerization (which includes acrylamide formation), and hydrogenation (trans fat formation), can have negative effects on metabolic health as well [*].

Compounds created during frying with seed oils may negatively affect your microbiome and cause or worsen inflammatory disorders of the gut (such as inflammatory bowel disease (IBD)).

In a 2019 paper published in the American Journal of Clinical Nutrition, scientists found that consuming fried foods was associated with lower diversity of the microbiome (gut bacteria and other microorganisms) [*]. And low microbiome diversity is associated with reduced immunity, digestive problems, and other health issues [*,*,*,*].

In a 2020 study, researchers examined the link between a compound called 13-HPODE intestinal inflammation [*]. 13-HPODE is an inflammatory, oxidized lipid (fat) formed when omega-6 linoleic acid is heated.

The authors found confirming evidence with both in vitro (cell) and mouse experiments that 13-HPODE and similar compounds created during frying cause inflammation and gut barrier breakdown in the small intestine [*].

In a 2021 study with over 116,000 participants, researchers examined the connection between fried food intake and inflammatory bowel disease (IBD) [*]. People who ate fried food one or more times per day were three times more likely to experience Crohn's disease or ulcerative colitis than those who never ate fried foods, even adjusting for other risk factors.

A separate 2020 study of over 103,000 survey participants also found that consuming french fries was associated with a 60% higher risk of IBD [*].

According to the authors of a 2018 peer-reviewed paper, pro-inflammatory foods like fried foods are an important risk factor for developing ulcerative colitis (a type of IBD) [*]. IBD patients have also reported that fried foods generally worsen their symptoms [*].

Considering their adverse health effects, it's unsurprising that common fried foods might be bad for athletic performance. That's likely why a 2021 survey found that these foods are at the top of the list of foods Division I college athletes (among the most elite collegiate athletes) choose to avoid [*].

In a 2017 prospective study of pregnant women with over 3,400 participants, researchers found that eating more than one serving of fried fish per month before or during early pregnancy was associated with a 68% higher risk of gestational diabetes, and consuming more than one serving of fried chicken each month predicted an 81% increased risk of gestational diabetes compared to eating none [*].

In a long-term study including over 21,000 pregnancies occurring in more than 15,000 women, consuming fried foods from restaurants 4-6 times per week before pregnancy was associated with a 31% higher rate of gestational diabetes, while eating them daily more than doubled the risk compared to less than once per week [*].

However, this long-term study showed no significant association between at-home fried food consumption and gestational diabetes [*]. As with the 2018 study on heart attacks covered earlier, the byproducts created by frying may explain this difference.

In a case-control study matching 2,579 cancer patients with 2,277 control subjects, high fried food intake was associated with a 1.3- to 2.3-fold increased risk of prostate cancer [*].

Frequent consumption of deep-fried foods is also associated with increased risks of cancers of the endometrium, ovaries, and larynx, as well as an increased risk of aggressive cancers [*].

With the scientific literature showing that eating restaurant-fried foods even once per month can significantly increase the risk of serious diseases like diabetes and cancer, you might conclude that there's no place for fried foods in a healthy diet.

Fortunately, that same body of literature gives us some valuable clues: first and foremost, frying your own at home is much safer. As demonstrated separately in two different studies, one investigating cardiovascular disease and one on gestational diabetes, frying at home effectively reduces your risk compared to buying from restaurants [*].

That’s because when you're cooking at home, you're not heating oil all day long or reusing it hundreds of times, so you're not producing acrylamides, aldehydes, free radicals, trans fats, and other toxic byproducts to the same degree as restaurants [*,*].

Again, avoiding restaurant-fried foods as much as possible is essential for your health because they're linked with severe health problems even at incredibly low consumption levels. Fry at home instead.

The second most important factor is the type of cooking oil you use to fry at home. Seed oils (like soybean, sunflower, peanut, corn, grapeseed, canola, cottonseed, and "vegetable oil blends") are still a problem whether or not you're frying or reusing your oil, because they're still linked to major health issues when compared to healthier alternatives.

And as a 2012 study published in the prestigious British Medical Journal found, replacing industrial seed oils with healthier alternatives prevents the negative health impact of deep frying foods [*]. The study, which had over 41,000 participants, found that eating fried foods significantly increased the risk of coronary heart disease — but when they analyzed olive oil consumption versus sunflower oil or other vegetable (seed) oils, there was no association between frying in olive oil and having heart disease, likely due to its lower linoleic acid content.

Be sure to choose better frying oils that also suit your culinary needs. The best options are fats low in polyunsaturated fats with good thermal stability, traditional examples of which include olive oil, avocado oil, coconut oil, and most animal fats, excluding butter (which has poor thermal stability due to milk solids) [*,*].

Cultured Oil is a new type of cooking and culinary oil made through fermentation. Zero Acre Farms introduced this product because even the “healthiest” conventional vegetable oils have significant downsides, especially regarding environmental impact, land and water use, and fair labor practices.

The statistics on the negative health impacts of fried food are extremely concerning. Over one-third of American adults consume foods, typically deep fried, from fast food restaurants every day [*,*].

Even if you're only eating fried foods from restaurants once or twice a month, this could dramatically increase your risk of certain health problems.

Luckily, you can avoid these issues by avoiding restaurant-fried foods and instead making your own at home — because you're not reusing oil repeatedly, you're not exposing yourself to toxic frying byproducts. 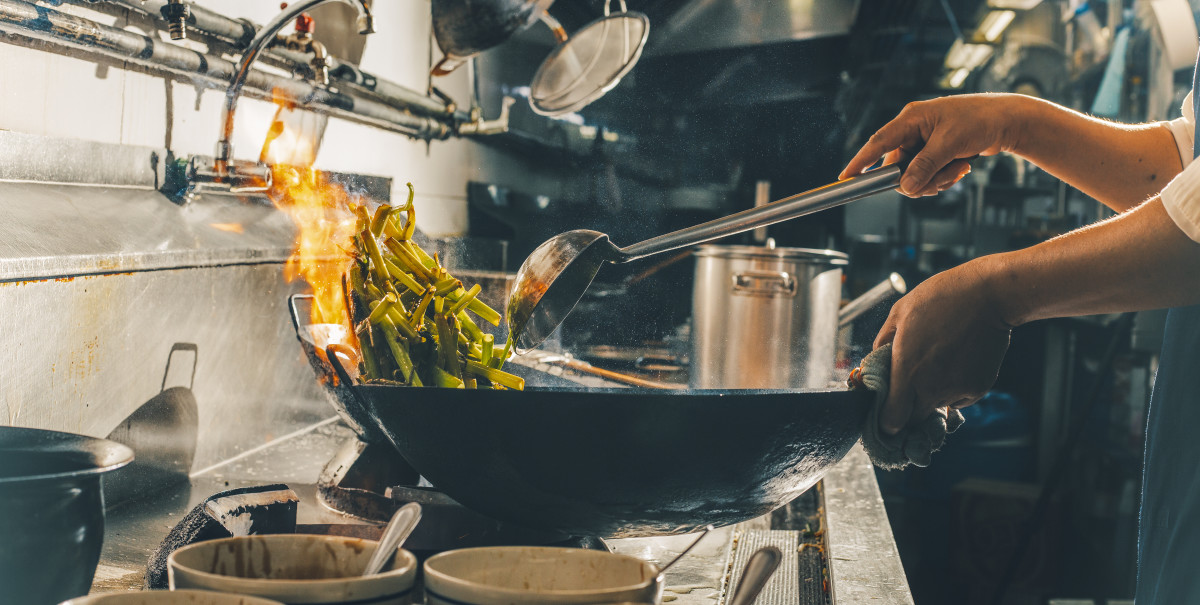 Best Oils for Frying: Pros, Cons, Which to Avoid

Are fried foods inherently unhealthy? You can make fried foods healthier and tastier with these top best oils for frying.